from the pages of

Filippo Tomasso Marinetti was an expert with newspapers: the coverage that he secured for Futurism both in Italy and abroad was amazing.

During one of the visits to London newspaper claiming to be a war reporter fresh from the Turkish front. An article was duly commissioned. Half way through, the action suddenly switched from Turkish wars to the futurists' activities in London. 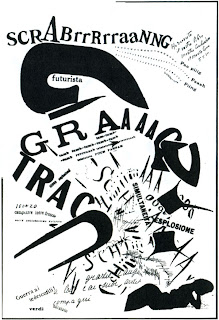 Often and under pressure from Marinetti, the manifesto was produced  before any tangible evidence existed of the innovation it announced.

The function of the manifesto was to create excitement and polemic, and it was an ideal medium for that.; it was cheap and quick to produce, could be run off in vast editions, distributed on the streets and sent  out by posts so that reverberations were felt from Japan to United States. It gave the impression that Futurist movement was a huge organisation encompassing all the  disciplines. And to reinforce the idea of Futurism spread throughout the world.

Marinetti gained enormous publicity from trials for obscenity that followed the publication in 1910 of his novel Mafarka Futurista' the ofending item being Mafarka's eleven meter long penis which he wrapped around himself when he slept. Marinetti was acquitted at the first trial, given a two-and -a- half- month suspended sentence at the second, and had the same suspended sentence confirmed at the third. this experience was turned to advantage whenever a charge emerged out of a futurist evening.

All things move, all things run, all things are rapidly changing. A profile is never motionless before our eyes.but it constantly appears and disappears. on account of the persistency of an image on the retina, moving objects constantly multiply themselves; their from changes, like rapid vibrations, in their mid career. Thus a running Horse has not  four legs, but twenty, and their movements are triangular.

All is conventional in Art. Nothing is absolute in painting. What was truth for the painters of yesterday is but a falsehood today. We declare, for instance, that a portrait must not be like a sitter, and that the painter carries within himself the landscapes which he would fix upon his canvas. 'To paint a human figure you must not paint it; you must render the whole of its surrounding atmosphere.

' Space no longer exists; the street pavement, soaked by rain beneath the glare of electric lamps, becomes immensely deep and gapes to the very centre of the earth. Thousands of miles divide us from the sun; yet the house in front of us fits into the solar disc.

' Who can still believe the opacity of our bodies, since our sharpened and multiplied sensitivity has already penetrated the obscure manifestations of the medium? Why should we forget in our creations the doubled power of our sight, capable of giving results analogous to those of the X rays? ...... 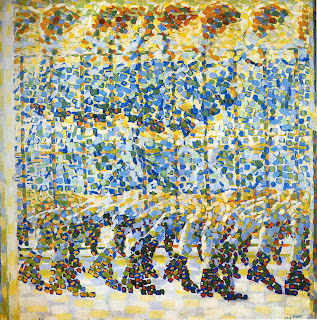 ' The sixteen people around you in a rolling motor bus are in turn and at the same time one, ten, four, three, they are motionless and change places; they come and go, bound into the street, are suddenly swallowed up by the sunshine, then come back and sit before you,like persistent symbols of universal vibration.

'How often have we seen upon the cheek of a person with whom we are talking and the horse which passes at the end of the street?

'Our bodies penetrate the sofas upon which we sit, and the sofas penetrate our bodies. The motor bus rushes into the house it passes, and in their turn the houses throw themselves upon the motor bus and are blended with it.

Futurist admiration seems to have been influenced by articles published in La Voce in 1909 by Ardengo Soffici;  ' The movements of a figure must not stop with its contour.... The intensity of the play of values and the protrusions of lines of the work should impel it into space. spreading out into infinity the way an electric wave emitted by a well constructed machine flies out to rejoin the eternal force of the universe.

Posted by Unknown at 8:58 AM No comments: 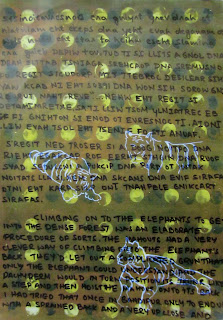 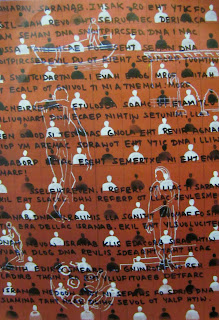 Posted by Unknown at 9:28 AM No comments:

Dark colored Burnt Sienna blocks were piled one on another, formed forbidden wall, on a hot day inviting a cool breeze in Crimson and Blue spilled sky.

When we turned around we could see a Gallery, a structure in White surrounded by Green. The pebbled path took us inside this White structure which was well lit and had no one to address.

We went inside the Art Gallery and to our surprise we saw a lady with a man walking slowly together hand in hand across the gallery. I was looking carefully at the displayed works by master Artists like A. Ramachandran and turned around to see my sister. She looked delighted to be part of the evening as was I.
I looked at the lady and her movements suggested me that she was an Artist herself and she is not a participant in the current ongoing exhibition at this Gallery. She looked towards me at the man’s absence and I turned incidentally away from her when she smiled. To my right, stands this woman who is obliged to talk and share a thing or two and to the left my sister who is more interested in observing me. She smiled and was anticipating reply and to communicate. I came to notice this, when she said “hi”. I apologized with “sorry” and started the conversation where after a while I observed the shift passed unto my sister. She was telling that she studied in London and practicing in Germany. I shook my head, smiled and left.

I heard a sound above the stairs. Diwali ambiance, children were screaming, playing and Dancing where as many women gossipers sitting together dressed up in one of the room.
The room to the left of the stairs was occupied with flashy metal objects hanging in mid air with a few amazed visitors glued to it, another exhibition! This was more interesting as the objects were moving with the light. 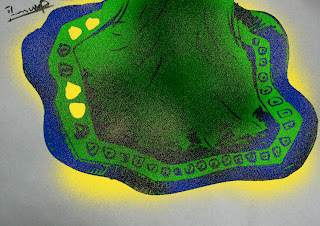 Nityananda popped up. The huge fat guy, I met in Chennai at one of the ugly hotel where I used to eat every day. A humble, gentle giant from Mysore conveyed with utmost excitement that the displayed objects are part of his exhibition. I was already delighted and with this, I was more thrilled to be present there.

Nityananda seemed to be excited and blessed to exhibit his works. This exhibition could taste the success, thought the visitors and they were so happy to present themselves at the gallery.

Most of the visitors were awaiting my arrival, accepted and greeted very well. I could not hold myself at this evening to respond to the evening and the lights. The colors spiced up the festive atmosphere. Women and kids were so happy getting together and sharing their experiences.

The whole gallery turned into a hall staging performance. The sound and movement of music made people dance within themselves.

The green long skirt slithered everywhere.  Gravity of the earth had disappeared. I was manifested into a Sufi with a long skirt/ Ghagra with a flaring outfit. I was accompanied by invisible Gopikas dancing with me. I felt a Peacock. People who experienced this were ecstatic and mesmerized by the movement of the bluish green peacock outfit.

The whole space was filled with invisible Dancers and an accomplishment of reaching to the divine   was overwhelmed at the descending notes of the music.

The whole evening was remembered in colors and lights. Green, Blue, glowing Gold, bits of Scarlet Red, Magenta, Brown and sparkling electric Blue with Violet tint weaved a web on my cortex.


The beauty and divinity of Krishna and Gopikas, the sanity of being a Sufi was truly overwhelming and its memories remained sublime.
Posted by Unknown at 12:40 PM No comments: